Abuse of vaccination and diseases 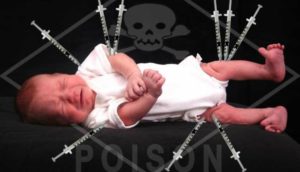 In frame of my work on autism, I have noticed that certain parents complained by seeing their child declining further to a vaccination.

In this article, it is a question of observing what the authorities of the public health of my French neighbors impose to parents. Because indeed, indirectly, I would like to make you think about the practice of vaccines in your own country.

A single type of vaccine is at present available in France. It is about some hexavalent vaccine stemming from laboratories Pasteur ( Hexyon) or by GSK  (Infarix Hexa) (which inoculates against five diseases) supposed to avoid diphtheria, tetanus and polio as well as pertussis (whooping cough) and haemophilus because since 2014, there is a “generalized shortage”  of  tetravalent vaccines (diphteria, pertussis and  tetanus called the DPT vaccine) and pentavalent vaccines (DT-polio-Haemophilus Influenzae B-pertussis).

So, according to the cancerologist Dr Joyeux, (2) hexavalent vaccines stemming from laboratories Pasteur ( Hexyon) or by GSK ( Infarix Hexa) are thus imposed by the French authorities. Nevertheless the latter contain some aluminum, without formaldehyde officially, with a residue according to other sources. Formaldehyde is carcinogenic and is not really necessary. Both vaccines are 50 Euros each.

Let us note at the same time that only available vaccines (InfanrixHexa costs 39.04 Euros) are 7 times more expensive that simple DT-polio ( 6.10 Euros) which is not available any more. This “convenient shortage” so brings to pharmaceutical companies dozens million euros.

– The DPT Revaxis of Pasteur was removed from the sale in 2004 and contained  formaldehyde and aluminum.

– The DPT of Mérieux and DPT of Pasteur (sold to the price of 6.70 Euro) were removed from the sale since 2005. They contained formaldehyde and aluminum. Stocks are almost exhausted and we notice a traffic on the borders Switzerland-France.

– The Hexyon contains some hydroxide of aluminum and phosphate of aluminiun.

– The competitor Hexavax is out-of-the-way since 2005, 5 the years after its launch on the market, because of grave cerebral complications at the infants.

* The vaccine against hepatitis B contained in InfanrixHexa is suspected of favoring multiple sclerosis.

« From two sources of data, those of the national system of Health insurance (CNAM) and of the system‘s pharmacovigilance of the ANSM (Agence nationale de sécurité des médicaments et des produits de santé), Dr Dominique Le Houézec identified a 65 % increase of the cases of multiple sclerosises (SEP) in the years 1995-1996, that is two years after the vaccination drive of mass against the hepatitis B which took place in 1994 “. (9)

* Furthermore, the hexavalent vaccine contains additives (aluminum, formaldehyde) serving to create an inflammatory answer, “to mark” the immune system. (3) They thus assault the body, because the latter tries to defend itself. By definition, additives are aggressive products.

Because doses are too low, until 10 000 times lower than the lethal dose for adult people, we so persuade us as additives with mercury and with aluminum, neurotoxins, or with formaldehyde (a carcinogenic compound) are not dangerous. Yet, they are injected into infants, not adults, and it directly in blood. They do not pass by the digestive system (by the filter of  liver), but that they are directly injected into the blood system.

As Pr Gherandi’s works (Inserm) and of Pr Authier ( Mondor) says, with the aluminum staying in muscles, we dread the long-term consequences (the myofascite with macrophages or, a neurodegenerative disease, such the multiple sclerosis ).

Moreover, the vaccine against hepatitis B indicates, on its note, that he can cause the multiple sclerosis. And the American epidemiologist Hernan demonstrated in a study of 2004 the existence of a 3.1 times upper risk of declaring a multiple sclerosis in three years following a vaccination anti-hepatitis B. Many studies connect vaccine against hepatitis B to diabetes, to lupus, to optical neuritis, to rheumatoid polyarthritis, to  thyroid and other diseases. (10)

By penetrating into the brain, aluminum can cause grave nervous diseases (Alzheimer or Parkinson’s disease). Where from the advice to avoid cosmetics with aluminum. (7)

As for the  formaldehyde, it is classified as ” certain carcinogenic ” by the International Center of cancer research ( CIRC) dependent on the World Health Organization (WHO). (6)

* In the 90s, Thiomersal contained some mercury and was used as adjuvating. We suspect it as the cause of autism at children. So, in all the vaccines recommended at the children of less than 6 years, it was removed or reduces in ≤ 1 µg / measure. (2)

* The hexavalent vaccine InfanrixHexa (containing Dt-polio) also contains valence hepatitis B.  Nevertheless, a vaccine is an injection of foreign bodies but also a medicine active as the others.

It is never harmless and still contains a risk. When the authorities assert that they are safe, it is to assert globally that the risks run for the patients are lower than benefactions possibly waited. But on no account, it means that they have no risk and so, we can assert that it is not thus reasonable to inoculate a patient who does not have or not much risk of being in touch with the disease.

Moreover, Dr Joyeux asserts: “At a given individual who is not exposed to an infection and to whom the vaccination presents a risk, the individual management of the risk has to recommend not to inoculate. That is why it is logical to inoculate all the staff looking against hepatitis B, a disease which is passed on by blood and physical fluids (…).On the other hand, for a two-month-old baby, which do not practise medical interventions, who is not a drug addict and who has neither sexual intercourse nor narrow contact with sick potential of hepatitis B, it is not sure at all that the profits of a protection against a little likely disease justify to run a risk of some vaccine “. (3)

* The immune system of an infant in his own limits in front of a hexavalent vaccine.

To cause an immune response, the vaccination requests the immune system with a weakened infectious agent: we are then exposed to not pathogenic bacterial or viral forms or to components of the microorganisms which we can escape.

So, the next time as it will be confronted with this infectious agent, the immune system can reach a protective answer based on the immunological memory thanks to the production of antibody and specific white globules named effective lymphocytes. So, the immune system can react to it. In every antigenic contact represented by the vaccinal reminder, there is manufacturing of antibodies and memory cells.

The vaccination is only justified when it insures an individual protection and a collective protection by limiting the scattering of infectious agents (as in the case of the anti-variola vaccination to eradicate the smallpox from 1958).

However, as Dr Joyeux notes it, our immune system can deal with several minor infections, and one or two major attacks. Yet, the hexavalent vaccine asks  the body of a 2-month-old baby to face 6 simultaneous major infections, while the immune system of an infant is still immature. It depends essentially on that of the mother, via feeding.

We know nothing of the long-term immune answer when there are 6 valences of antigens in a vaccine because this practice to use 6 valences is new. And because we do not take into account the HLA group of people before inoculating them, we cannot predict the sanitary long-term risks.

* Even a trivalent vaccine entails its risks. (6) For Dr Wakefield, the Measles Mumps Rubella vaccine was too quickly approved and the side effects of the vaccine are specific to the MMR rather than to the monovalent vaccine of the measles. Indeed, the vaccine MMR possesses a biological interference between the various viruses which compose it which increases the risks of gastrointestinal symptoms pulling an inflammatory disease of intestines and consequently autism. At the children presenting the inflammatory disease “the nodular lymphoid hyperplasia” (also called “autistic enterocolitis”), the virus of the measles is especially present at the level of the wall of the ileum and the colon.

In the newspaper Le Figaro, it is possible to read the unfortunate history of Ayanna ( 7 months) who took place in 2015 in France: ” It had to be a commonplace vaccination. But at night from 5 till 6 May, a few hours after having received the injection of two vaccines intended to fight against whooping cough, hepatitis B, polio,  tetanus and diphtheria, Ayana, seven months, was a victim of a high fever, followed by convulsions “. (4)

The infant was inoculated  by InfanrixHexa (containing of  neomycin of which the child may have made a reaction allergic) and to Prévenar 13 (against  pneumococcus). Both vaccines contain some aluminum.

Also let us tell a parents’story from Spain who by fear of the side effects, refused to inoculate their child. The latter died from diphtheria. (5)

The infant breast-fed by his/her mom so inherits from the maternal immunity. The feeding protects him/her up to the age of approximately 9 months. It is thus important that the mothers breast-feed in full during at least 6 months as the WHO recommends it.

In the case of France, the most warned professionals wish that the trivalent vaccine DTP without additive is made as quickly as possible to avoid this obnoxious situation . Our children are not economic objects.

It is not a question of opposing systematically to vaccines because they are useful to prevent an epidemic or protect the patients at risk.

But for my part, living in Belgium, I would like that we consider more the fact than we do not know the long-term effects of vaccines given to our children. I met pediatricians in Belgium who avoid inoculating the children by a vaccine carrier of 5 to 6 valences and who weigh the risk / profit at best. My best wish is to see this practice at all other pediatricians whether it is in Belgium or in the rest of the world.

The well-being of our children depends on it.