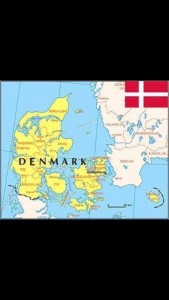 The first feeling that you have when you arrive to Denmark is this feeling of well-being and comfort. Indeed, Denmark and the other Scandinavian countries (Sweden, Norway, and Iceland) have a high level of happiness and well-being. They are known for their society with particular values: public-spiritedness, political life, lifestyles, system of social benefits, exceptional educational system, assistances to people with special needs, … They move on a bicycle, sort out their waste (up to nine different trash cans) and make “ecological” efforts thanks to ecological constructions, the use of renewable energies or the recycling of waste.

Why did I go to Denmark within the framework of my work on autism?

– First of all, Princess Marie of Denmark is a patron of Autism Denmark. It means that the field of autism is an important domain supported by the Danish gouvenement.

– Denmark is also a country which is a part of Scandinavia. So, the country gives a lot of importance in the well-being of its population but also to make people independent. Denmark also aspires that people with special needs become as independent as they can be according their capacity.

– Denmark is also a small country of which the structure of services is easy to understand and very well built.

– It is also a country where the health system aims to be strong. We do not become impoverished by being a sick or handicaped person. On the contrary, we facilitate you life.

– With such a vision of well-being based on the independence of citizens and a strong health system, it is obvious that you will find a community of people involved in the well-being of people with special needs and their families. For these professionals, it is part of their values.

– They also have their own vision of autism.

What is the Scandinavian vision for autism?

– In Denmark, before speaking about autism, we speak about human beings. They have a family, passions, … But they also have their own specificities : an autistic logical mind, …

– In Denmark, we concentrate on positive things, lifeskills and talents of people with special needs. We do not thus try to make them as you or me. Each person is different, but each has a talent, …

– In Denmark, we will never speak about treatment (ABA,…), about hospitals, of diseases, because we do not aim at normalization.But we shall speak rather education to make them autonomous the most possible, to discover their talents, to have their own employment or apartment, … We concentrate on what is meaningful for the person so that his/
her life take sense.We will do our best to give them a place into the society. And it is there that begins happiness and dignity because we all aspire to be independent and to own our life,…

– We know that autism is a spectrum, that there are various levels of autonomy, communication, … But we also have different age ranges and we have an average life expectancy of 71 years. Then why do we always speak about children and forget adults?

And beyond the different age ranges, we also have groups of people who are living different realities. For example, teenagers who dropped school, teenagers with difficult behaviors, …

So, I would like to insist on the fact that there is no only one type of center, school which would work for all the population with autism. But there are different places adapted to autism while being also adapted to the concerned population and to their problematic (as we do for every population group).

And you will find in Denmark an almost complete project for autism which touches almost all the age brackets and the various problems for every age bracket.

– The second fact that I would like to highlight is that all around the world, I was able to meet magnificent people. Most of the time, it was parents of children with autism who had created their own service. Sometimes just people with a great sens of empathy. Their sensibility made that they perfectly met the needs of people with autism and their families.

– The third fact is for me the most important. In every country, there is a community of people who worry about the cause of people with a handicap. According to me, the solution is to meet them and to create a global community. So we can move forward together in the field of handicap. It allows us to improve our practices and our vision for autism. Within this community, it is also necessary to give a voice to the parents and to the family who will explain you their challenges. And the ultimate element of the solution is to let people with autism to explain you their challenges.